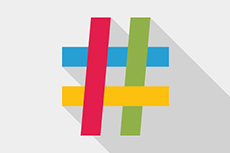 In early days of Social Media (that doesn’t seem such a long time ago), we were all using hashtags mindlessly; not knowing their importance in the digital world. What started as a joke, has now become an integral part of Social Media Marketing. Hashtags can also be termed as the ‘language of the internet’ that is evolving continuously. But do you know that this symbol has a rich history? That’s right! Read along to know how the symbol turned from hash to pound to octothorpe and finally a hashtag, as we know it today.

Back in the olden days, the Romans used the term libra pondo, meaning ‘pound in weight’. This was eventually shortened to ‘lb’ for libra. And when the Englishmen began writing this abbreviation, they put a little line across the top to indicate the contraction. As they wrote faster and faster, it just evolved in a hashtag (#).

In the 1960’s bell engineers added the # symbol to the telephone operating system and called it ‘Octothrope’. While in the 1980’s, # began to be used in the computer language on the platform known as Internet Relay Chat (IRC).

In mid-2000’s, these early chat rooms used hashtags to categorize images, messages and other content that were easy to search in groups of related content. A concept that still holds true today.

When was it first used as a ‘hashtag’

Hashtags actually came into existence for what they are today because of Chris Messina. A product designer, Chris, did in fact get the idea of a ‘hashtag’ from the chat rooms! When he pitched it to Twitter, they rejected it saying it was for ‘nerds’.

how do you feel about using # (pound) for groups. As in #barcamp [msg]?

And if you read the thread, you can clearly see that his followers could relate to what he’s saying! Then in October 2007, one of his friends was Tweeting about a San Diego wildfire. Chris asked him to add the #sandiegofire to his Tweets. And well, the rest is history.

As mentioned, Hashtags are a great tool to identify and group similar content together. They are also a great way to get followers by being precise and targeting the right audience. When someone searches for something, hashtags definitely make it easier to narrow the results and bring up content only relevant to the person.

Today, it’s hard to imagine Twitter without hashtags. There’s at least one in every tweet! This platform also has a section of ‘Trending Hashtags’ on the left-side of the page. In one of the most recent updates in the use of hashtags is its use in Twitter chats. Here, it proves to be a convenient way for people to have a conversation on Twitter in real-time.

Hashtags are a great way to handle your ORM (Online Reputation Management) and customer service. By monitoring your brand’s hashtag, you can always keep an eye on what your customers/consumers are saying about you.

Today, hashtags are not only limited to the Social Media platforms, they are even used in relation to TV shows, politics, breaking news, celebrities, activities and more! For instance, during the 2016 Presidential Elections, a number of hashtags made it to the ‘trending hashtags’ section; some of them were #MakeAmericaGreatAgain, #BlackLivesMatter, #FeelTheBern, #ImWithHer, etc.

The youth is now creating their own hashtags for their wedding and events that they can later search for later. So, with a simple hashtag like #HeWedsHer, the couple or their family can easily view all the photos, videos and posts related to the hashtag.

10. Because of its widespread use, hashtag was added to the Oxford English Dictionary in June 2014.

We hope our blog helps you handle your digital media presence better. Want us to evolve your brand in the digital world? Simply mail us on hello@clatterchatter.com!